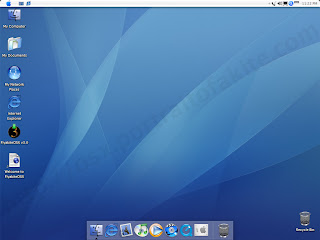 Here is the answer:

http://osx.portraitofakite.com/
Posted by Rigo Muniz at 7:49 AM No comments: Links to this post

So much for that silly story going around last week that Leopard, the next version of the Mac OS X, was going to be delayed until October so its Boot Camp feature -- which lets Intel-based Macs dual-boot with Windows -- could support Windows Vista.

Don't everyone rush to the servers at once . . .

Non-Apple TV owners can enjoy the out of box experience by viewing the opening video which one crafty person ripped from the hard drive and posted in all of it's 720p glory. You can also download the Quartz Composer Screen Saver and the Now Playing Screen. And if you're truly hard-core you can download the entire Apple TV OS, and (conceivably) install it on another Mac.

But this is just scratching the Apple TV surface.

True hackers will want to immediately take it apart (photos) and upgrade the wimpy 40GB HDD to 80 or 120GB - it's a standard 2.5-inch notebook mechanism (another HDD upgrade tutorial is here).

If you really want to hack it to the next level you can play Xvid movies on Apple TV, but it ain't pretty and involves removing the HDD (covered above) and un-breaking SSH (using Perian and DropBear) so you can access the Apple TV remotely.

If that's too much hassle for you there's a solution to automatically convert Xvid, Divx, WMV files to Apple TV format, and then import them into iTunes with a convenient Automator workflow.

You can even turn a Mac mini into an Apple TV or an Apple TV into a Web server (by installing Apache).

Keep up with even more Apple TV hacks at AppleTVHacks.net.
Posted by Rigo Muniz at 10:47 AM No comments: Links to this post

Travel back in Time 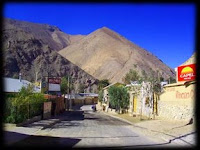 You Can't Travel Back in Time, Scientists Say

The urge to hug a departed loved one again or prevent atrocities are among the compelling reasons that keep the notion of time travel alive in the minds of many.

While the idea makes for great fiction, some scientists now say traveling to the past is impossible.

There are a handful of scenarios that theorists have suggested for how one might travel to the past, said Brian Greene, author of the bestseller, “The Elegant Universe” and a physicist at Columbia University.“And almost all of them, if you look at them closely, brush up right at the edge of physics as we understand it. Most of us think that almost all of them can be ruled out.”
Vote for Your Favorite Time Travel Tale

In physics, time is described as a dimension much like length, width, and height. When you travel from your house to the grocery store, you’re traveling through a direction in space, making headway in all the spatial dimensions—length, width and height. But you’re also traveling forward in time, the fourth dimension.

“Space and time are tangled together in a sort of a four-dimensional fabric called space-time,” said Charles Liu, an astrophysicist with the City University of New York, College of Staten Island and co-author of the book “One Universe: At Home In The Cosmos.”

Space-time, Liu explains, can be thought of as a piece of spandex with four dimensions. “When something that has mass—you and I, an object, a planet, or any star—sits in that piece of four-dimensional spandex, it causes it to create a dimple,” he said. “That dimple is a manifestation of space-time bending to accommodate this mass.”

The bending of space-time causes objects to move on a curved path and that curvature of space is what we know as gravity.

Mathematically one can go backwards or forwards in the three spatial dimensions. But time doesn’t share this multi-directional freedom.

“In this four-dimensional space-time, you’re only able to move forward in time,” Liu told LiveScience.
Video: Can You Time Travel?

Tunneling to the past

A handful of proposals exist for time travel. The most developed of these approaches involves a wormhole—a hypothetical tunnel connecting two regions of space-time. The regions bridged could be two completely different universes or two parts of one universe. Matter can travel through either mouth of the wormhole to reach a destination on the other side.

“Wormholes are the future, wormholes are the past,” said Michio Kaku, author of “Hyperspace” and “Parallel Worlds” and a physicist at the City University of New York. “But we have to be very careful. The gasoline necessary to energize a time machine is far beyond anything that we can assemble with today’s technology.”

To punch a hole into the fabric of space-time, Kaku explained, would require the energy of a star or negative energy, an exotic entity with an energy of less than nothing.

Greene, an expert on string theory—which views matter in a minimum of 10 dimensions and tries to bridge the gap between particle physics and nature's fundamental forces, questioned this scenario.

“Many people who study the subject doubt that that approach has any chance of working,” Greene said in an interview . “But the basic idea if you’re very, very optimistic is that if you fiddle with the wormhole openings, you can make it not only a shortcut from a point in space to another point in space, but a shortcut from one moment in time to another moment in time.”
Video: How to Time Travel!

Another popular theory for potential time travelers involves something called cosmic strings—narrow tubes of energy stretched across the entire length of the ever-expanding universe. These skinny regions, leftover from the early cosmos, are predicted to contain huge amounts of mass and therefore could warp the space-time around them.

Cosmic strings are either infinite or they’re in loops, with no ends, said J. Richard Gott, author of “Time Travel in Einstein's Universe” and an astrophysicist at Princeton University. “So they are either like spaghetti or SpaghettiO’s.”

The approach of two such strings parallel to each other, said Gott, will bend space-time so vigorously and in such a particular configuration that might make time travel possible, in theory.

“This is a project that a super civilization might attempt,” Gott told LiveScience. “It’s far beyond what we can do. We’re a civilization that’s not even controlling the energy resources of our planet.”

Mathematically, you can certainly say something is traveling to the past, Liu said. “But it is not possible for you and me to travel backward in time,” he said.

However, some scientists believe that traveling to the past is, in fact, theoretically possible, though impractical.

Maybe if there were a theory of everything, one could solve all of Einstein’s equations through a wormhole, and see whether time travel is really possible, Kaku said. “But that would require a technology far more advanced than anything we can muster," he said. "Don’t expect any young inventor to announce tomorrow in a press release that he or she has invented a time machine in their basement.”

For now, the only definitive part of travel in the fourth dimension is that we’re stepping further into the future with each passing moment. So for those hoping to see Earth a million years from now, scientists have good news.

“If you want to know what the Earth is like one million years from now, I’ll tell you how to do that,” said Greene, a consultant for “Déjà Vu,” a recent movie that dealt with time travel. “Build a spaceship. Go near the speed of light for a length of time—that I could calculate. Come back to Earth, and when you step out of your ship you will have aged perhaps one year while the Earth would have aged one million years. You would have traveled to Earth’s future.”

Visit LiveScience.com for more daily news, views and scientific inquiry with an original, provocative point of view. LiveScience reports amazing, real world breakthroughs, made simple and stimulating for people on the go. Check out our collection of Science, Animal and Dinosaur Pictures, Science Videos, Hot Topics, Trivia, Top 10s, Voting, Amazing Images, Reader Favorites, and more. Get cool gadgets at the new LiveScience Store, sign up for our free daily email newsletter and check out our RSS feeds today!
Posted by Rigo Muniz at 1:51 PM No comments: Links to this post